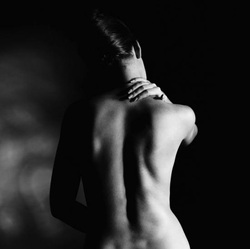 Chiropractors are becoming more concerned regarding therapeutic efficacy, as insurance companies set up preferred provider groups. Lasers, due to their dramatic impact on tissue healing and thereby alleviating pain, effectively support chiropractic intervention.This article provides an overview of the mechanisms of lasers and their potential for healing and supporting chiropractic therapy.Introduction

Lasers have been in use for less than 20 years. Clinically, there have been no recorded side effects in over 1,700 publications. The application of laser to tissue is totally safe, noninvasive, nontoxic and should replace medication, most physiotherapeutic modalities and, in many situations, the surgical approaches.

Low-energy photons (LEP) are light photons of visible and near-infrared wavelengths range (400-10,000 nm). Unlike ultraviolet or x-ray irradiation, light photons of this wavelength range have less energy, which is not enough to provide biomolecular ionization or damage. With the laser's discovery, powerful monochromatic sources of low-energy photons became available for scientific research, and nonretinal mammalian cell photosensitivity was discovered.

Review of the Literature

Karu1 suggested that irradiation of isolated mitochondria induces changes in cellular homeostasis, which entails a cascade of reactions, and proposes a number of the components of the respiratory chain (e.g., cytochromes, cytochrome oxidase and flavine dehydrogenase), which are primary photoacceptors or chromophores and thus able to absorb light at appropriate wavelengths. This causes short-term activation of the respiratory chain, leading to changes in redox status of both mitochondria and cytoplasm. In turn, the activation of the electron transport chain in this way results in enhanced synthesis of ATP. Furthermore, laser irradiation also affects hydrogen ion levels in the cell. This, coupled with an increase in ATP, causes activation of other membrane ion carriers such as sodium and potassium, and alters the flow of calcium between mitochondria and cytoplasm. The variation of such parameters is a necessary component in the control of proliferative activity of the cell.

Lyons2 found a considerable improvement in tensile strength of irradiated wounds at one and two weeks postirradiation, with collagen content significantly increased after two weeks. Abergel3 also found improvement in tensile strength due to enhanced collagen accumulation in mice, and further showed procollagen levels in irradiated pigskin were elevated.

Regarding laser's effects on pain conditions, Baxter6 stated: "Lasers achieved the premier overall ranking for relief of pain compared with the other listed electromodalities."

Lombard7 stated that the neuropharmacological analgesic effects of lasers are most likely due to the release of serotonin and acetylcholine at the site and through higher centers.

Baxter8 reported on a number of studies which have shown that high-energy densities of laser therapy to the small diameter unmyelinated fibers (e.g., nociceptors) produce an obvious decrease in elicited activity to standardized stimuli.

England9 showed statistically the efficacy of low-power laser therapy on shoulder tendinitis in a controlled study. He cautioned the extrapolation of the results in justifying the use of the laser in other clinical situations. Further studies are required not only to demonstrate the laser's efficacy for other conditions, but to establish optimum treatment parameters.

Lasers with specific optical parameters (wavelength, intensity, dose) can alter cell proliferation, motility and secretion.10 Some of these laser induced phenomena can be used in clinical practice to enhance healing in the body. Low-energy photon-laser therapy appears to be helpful for the treatment of chronic leg ulcers,11,12 rheumatoid arthritis,13,14 and some musculoskeletal and neuromuscular diseases.15,16

Recent in vivo and clinical studies suggest that lasers can induce phenomena in injured tissues which promote acceleration of recovery after acute trauma.16,17,18 Faster edema reduction and lymph flow enhancement was observed in laser-treated animals after surgery in mice,19 and experimental rat arthritis.20 Lievens19 observed faster edema resolution and regeneration at cut blood and lymph vessels in the laser treated group in the study performed on 600 mice.

Active trigger points in soft tissue developing after acute trauma contribute to muscle spasm and pain. Airaksinen16 observed marked statistically significant improvement in pain thresholds after laser therapy in comparison with a placebo treated group of patients with chronic muscle tension in the neck. The pain relief may be related to laser induced plasma B-endorphin level increases, which was observed in a study by Laakso.24

Recently, it was shown in three randomly designed groups of patients suffering "whiplash injuries" that the group which had laser therapy had rapid improvement in their extensor neck strength. This was probably due to the fact that there was effective pain reduction and the promotion of healing to the injured tissues.25 An earlier study by Fitz-Ritson26showed that laser therapy assisted radicular symptom improvement and restoration of the cervical lordosis in a patient who had suffered with chronic trauma to the cervical spine. One of the symptoms the patient had was degeneration of the disc at C5-C6 and occasional vertigo with activity. The vertigo was improved, as was the movement of the entire spine and hence the coupling movement of the disc-vertebrae.

The other area in which laser therapy may yet find considerable application is in the treatment of neural lesions. Rockhind, et al.27 reported results of their preliminary findings in patients suffering from a range of neural lesions, including severe spinal cord and cauda equina lesions where conservative therapy was unsuccessful. The results indicate that laser therapy at high dosage directly over the site of the spinal cord lesion produces marked neurological improvement. This suggests that in these types of cases, laser therapy may promote return of neural function and repair and prevent extensive degenerative changes.

If further clinical studies can continue to produce convincing clinical improvements in such patients, the potential implications for future management and rehabilitation of these conditions and the acceptance of low-intensity laser therapy are enormous.28 A pilot study will show the effect of lasers on neuromusculoskeletal pathologies.

Study Design/Objective: A pilot study was conducted to investigate the efficacy of the Bioflex laser, a low-energy photon therapy device, in treating carpal tunnel syndrome (CTS). pain and strength measures were monitored during a course of 12 treatments.

Summary of Background Data: Studies over the last 10 years have shown the efficacy of lasers both experimentally and clinically.

Methods: Seven patients with diagnosed CTS were tested both objectively with hand dynamometry and subjectively with visual analog scales (VAS) initially, and after 12 treatments with the Bioflex laser and manipulation/soft tissue therapy as indicated.

Recent studies are showing the prevalence of repetitive strain injuries (RSI) in the workplace. There is an enormous cost to society, both due to the individual's suffering and the decreased productivity due to RSI. Carpal tunnel syndrome (CTS) is a subcategory of RSI. The efficacy of the Bioflex laser on CTS was the purpose of the pilot study. The two pertinent questions relevant to the study were: Is the Bioflex laser effective in treating CTS? Would it resolve the symptoms, i.e., pain and decreased grip in 12 treatments?

Seven patients who had diagnosed CTS (two had surgical dates), with ages ranging from 29-62 years, and a duration of 7-33 months (mean age of 45 years, 6 months and mean duration of 14 months), were used for this study. Two patients had bilateral CTS.

Objective testing was done with a Jamar hand dynamometer. Initially, all patients were tested at the three settings to ascertain their level of effort. Using the three settings, a bell curve should result when the points are plotted. Following a rest period of 10 minutes, patients were tested at the middle setting and asked to squeeze as hard as possible. Two attempts were averaged for the data used. The testing was again done after the 12th treatment. The bell curve procedure was not used at the exit test.

Treatment with the Bioflex laser was for 10 minutes, three times per week. The laser settings were: 100 mW; 50 percent duty cycle; 1000 Hz frequency. The first two treatments were with the red laser and the remaining treatments were with infra-red. The two patients who had bilateral CTS received treatments on both wrists. All patients received soft tissue therapy and mobilization. Manipulation was provided as indicated by motion palpation.

The two patients who continued to experience pain were both chronic and had bilateral CTS. One of the patients was not motivated, as shown by the lack of the bell curve with the hand dynamometry testing in the three different positions. The motivated patient had an additional eight treatments, with minimal improvements.

This pilot study shows the efficacy of the Bioflex laser in treating unilateral CTS. Five of the seven patients (71 percent) were pain-free by the 12th treatment. Two of the five were pain free by the eighth and ninth treatments, respectively. Larger, randomized studies are necessary to verify this finding.

The fact that two patients did not respond (one did not attend regularly) could point to a number of conclusions. One conclusion is that laser therapy may not help all neuromusculoskeletal pathologies. A second conclusion is that the utilization of different parameters may be necessary and further research is needed. A third conclusion, which is the most exciting, is that laser therapy provides photon energy to the cells. This causes the cells to begin the process of returning to normal function. if adequate substrate is not available either in or around the cell, the photons entering will not be able to initiate the process whereby the call can return to normal. This may be a factor with some chronic patients. They may need proper nutritional therapy or other therapy initially to enhance the ability of the cell to respond.

In a recently reported study in Toronto, 15 out of 21 (71.4 percent) chronic CTS were able to return to work. Not mentioned was how many treatments were required. Also mentioned was that other nonsurgical treatments such as anti-inflammatory medication and corticosteroid injections have a success rate of 20-40 percent and provide only temporary relief.

To understand why the laser was successful, further clinical studies are necessary. This will provide insight regarding the therapeutic efficacy of the laser in treating certain types of neuromusculoskeletal pathologies.

Next month, we will provide more detailed therapeutic effects of laser treatments on neuromusculoskeletal pathologies with one of the world's leading clinical researchers, Dr. E. David Baxter.


F. Kahn, MD, FRCS(C)
Don Fitz-Ritson, DC
Toronto, Ontario, CanadaDr. Fred Kahn is a graduate of the University of Toronto, Faculty of Medicine, a fellow of the Royal College of Surgeons of Canada and the diplomate of the American Board of Surgery. He is the founder of Meditech International, Inc.